Arrive Delhi. Upon arrival in Delhi, the guest will be met by our representative and transferred to hotel. Overnight at hotel. 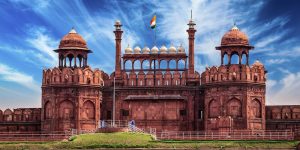 Morning drive to Agra (203 kms). Upon arrival in Agra – check into the hotel.Thereafter visit famous Taj Mahal – This most famous Moghul monument was constructed by Emperor Shah Jahan in memory of his wife Mumtaz Mahal “the lady of the Taj”. It has been described as the most extravagant monument ever built for love, for the emperor was heartbroken when Mumtaz died after 17 years of marriage, during the birth of her 14th child.The central structure has four small domes surrounding the huge, central dome. Above the tombs of Mumtaz Mahal and Shah Jahan are false tombs, a common practice in Indian mausoleums. (Taj Mahal is closed on Friday).Visit Red Fort – lies on the bend of the river Yamuna, almost in the heart of the town. It was built by Akbar as his citadel over the years 1563-73 in the finest architectural style. It has imposing gates and walls of red sandstone and a moat.

Morning drive to Jaipur (221 kms), en route visit Fatehpur Sikri. Fatehpur Sikri the deserted, red sandstone city that was built by Emperor Akbar as his capital and palace in the 16th century. Also visit the Bulund Darwaza the largest gateway in the world. Continue drive to Jaipur and check-in at hotel.

Morning tour of the impressive Amber Fort, situated on a ridge just outside Jaipur City. At the foot of the hill you will mount your caparisoned elephant for the slow but steady climb up to the main gate, making your entrance in the time honoured fashion. The Fort, completed in the early 18th century, took over 100 years to build and now, although deserted, offers a fascinating insight into the lifestyle of the Moghul ruling families.Afternoon city tour of Jaipur – “The Pink City” is spectacularly set within surrounding rugged hills, dotted with ancient ruined fortresses. Your tour will include the imposing City Palace, still home to the Maharaja although several of the rooms are now open to the public. Many antiques and artifacts belonging to the ruling family are housed here, including a collection of weaponry. You will also visit the Hawa Mahal “Palace of the Winds”, and the open-air Jantar Mantar Observatory to see the vast astronomical instruments. Enjoy a stroll through the colourful bazaar before returning to your hotel.

Morning drive to Udaipur (385 kms). Upon arrival in Udaipur – check into the hotel.Rest of the day at leisure.

Morning city tour of Udaipur – the romantic Lake City in Southern Rajasthan, famous for the stunning white marble Palace built on an island in the Lake Pichola. It was the former Palace of the Maharana and now converted to one of the most glamorous hotels in India. The tour will cover the magnificent City Palace, the Garden of Maidens “Sahelion-ki-bari” and a drive around the other nearby lakes. Late afternoon, enjoy a boat cruise on the placid waters of Lake Pichola. From the lake you have a wonderful view of the City Palace stretching along the east bank, while the south bank has pleasant gardens running down to the waterside.

Morning drive to Mt. Abu (190 kms). Upon arrival in Mt. Abu – check into the hotel. A pleasant retreat set amidst the lush forested hills, Mt. Abu is a green oasis in the barren desert of Rajasthan. Situated at the southern tip of the Aravali range the hill retreat owes its cool climate to its rich flora covering the entire hillside that includes coniferous trees and flowering shrubs. Mt. Abu offers a stunning array of exquisite Dilwara Jain temples, beautifully carved temples built between 11th and 13th century A.D. are sheer elegance in marble, dedicated to the jain Tirthankaras. The Vimal Vasahi temple is the oldest of these dedicated to the first Tirthankara. Built in 1031 A.D. (by Vimal Shah-a merchant and representative of then Gujarat ruler), it is a superb example of temple architecture. Another is Lun Vasahi temple and Adhar Devi temple with its many stairs is a tourist attraction. Nakki Lake: The islets in the artificial lake and the rock formations on the sides are of interest. According to a legend, the Gods carved out the lake with their nails, nakki meaning nail.

Morning drive to Narlai (125 kms). Upon arrival in Narlai – check into the hotel. Narlai – a royal hunting retreat, between Jodhpur and Udaipur is an enchanting new destination. Situated amidst dramatic boulders and ancient temples, the Rawla lies at a foothill of a stupendous 350 – foot single rock granite hill. Maharaj and Rani Swaroop Singh and their sons oversaw the careful restoration of this 15th century home of Marwar nobility. The ambience is a special blend of aesthetics and comfort that envelope the senses. Rest of the day at leisure to explore the surrounding region.

Morning drive to Jodhpur (90 kms). Upon arrival in Jodhpur – check into the hotel. Afternoon city tour of Jodhpur – visit the Meherangarh Fort – one of the most impressive & formidable fort in the whole of fort-studded Rajasthan. It is situated on a high natural rock bluff from where you can look down on the wonderful panorama of the bustling city below. Also visit Jaswant Thada – the Royal Cenotaphs.

Morning drive to Pushkar (205 kms). Upon arrival in Pushkar – check into Deluxe Tents The Royal Camp which captures the luxurious nostalgia of a bygone age of the Maharaja’s Safari and Shikar camps, combined with innovative design demonstrating many of the skills and crafts of Marwar. The camp consists of tents, each with verandah, bedroom and bathroom. There is a large dining tent serving the best of Rajasthani cuisine and a large open reception tent with seating areas. Pushkar – is famous for its colourful annual fair during kartik poornima (full moon) in the November each year. At this time, this otherwise peaceful and gentle village on the banks of holy Pushkar take is thrown into colourful confusion when the desert tribes and camel caravans meet to trade cattle, camels, goat, sheep, clothes, jewellery and spices.

Full day at the fair. Built as ‘an explosion of fun, frolic, games and laughter’, the fair provides some wonderful photographic opportunities and is a rare change to see Rajasthani women decked out in all their traditional jewellery, dress and finery. It is worth getting up early to see the camels and tribes rousing themselves in the pink of the dawn desert light.

» Overnight at the Camp

Morning drive to Mandawa (240 km). Upon arrival in Mandawa, check-in at hotel. Afternoon visit the enormous Havelis with fascinating murals and painted frescoes built by the wealthy Rajasthani merchants (“Marwaris”) in the 19th century. The havelis are mansion of a unique residential architectural style that evolved around courtyards to serve the purpose of family security, privacy for the women as also protecting the inhabitants from the long, harsh summers.

This morning you will be taken to visit Old Delhi ? Former centre of Moghul Power, Old Delhi offers ancient monuments, narrow streets and bustling bazaars. Drive past the Red Fort, built in 1648 and board the ‘rickshaw ride’ for a unique experience from the Red Fort, through “Chandni Chowk” or Silver Street, experiencing the sights and sounds of this very busy avenue heading west from the Fort. Later visit the Jama Masjid, the greatest mosque in India and completed in 1658 by Shah Jahan who also built the Taj Mahal, and the Raj Ghat, the simple memorial to Mahatma Gandhi. Afternoon at leisure for own activities. Later transfer to international airport for your onward journey.