One of the most popular tour packages in India is a visit to cities falling into the golden triangle. Golden Triangle Tour With Varanasi offers you an opportunity to explore the popular cities of Delhi, Agra and Jaipur along with the ancient holy city of Varanasi.  During your visit, you will experience something different in each city. Delhi will offer a potpourri of everything, Agra will take you back to the Mughal times, Jaipur will offer you a sneak-peak into the erstwhile Rajputana royalty and Varanasi will enlighten your religious spirits.

Arrive in Delhi International Airport meet Surya Reisedienst’s representative transfer to hotel. Check in at a hotel and overnight stay in hotel.

Built by Shah Jahan, the construction was started in 1844 and was not completed until 1658; Red Fort, which was also built by Shah Jehan. This massive fort was built from 1638 to 1648; Chandni Chowk and Rajghat – the cremation site of Mahatma Gandhi. Witness the India Gate, the Presidents House & the Parliament. Visit Humayun’s Tomb: built in mid 16th century this is an early example of Mughal architecture; Qutab Minar. The tour ends with a visit to Laxmi Narayan Temple (Birla Mandir).

Surface: 270 kms (Approx), 5-6 Hours
After breakfast, drive to Jaipur: The capital city of the state of Rajasthan also know as Pink City owes its name, its foundation and planning to the great warrior-astronomer Maharaja Jai Singh II. The city of Jaipur has broad avenues. The city sits on a dry lake bed in a wild and somewhat arid landscape, surrounded by barren hills surmounted by fortresses and crenelated walls. Upon arrival, check-in at Hotel. Rest of the day at leisure.

After breakfast, excursion to Amber Fort enroute witness the façade of Hawa Mahal or the Palace of Winds which was built in 1799. Amber Fort – The ancient capital of the state until 1727 when Jai Singh decided to move from his hillside fortress at Amber to new site on the plains. The construction of this fort began in 1592 by Raja Man Singh, the Rajput commander of Akbar’s army. The fort is a superb example of Rajput architecture, stunningly situated on a hillside and overlooking a lake which reflects its terraces and ramparts. Visit the Jagmandir or the hall of victory glittering with mirrors, Jal Mahal & temple of Kali. Ascend on elephant back, the hill, on which the fort is situated.

Afternoon, City tour of Jaipur. Visit the Jantar Mantar the observatory built by Jai Singh in 1728; the City Palace which is a blend of Rajasthani and Mughal architecture. It also has a museum with an extensive collection of art, carpets, paintings, enamel ware and weapons dating back to the 15th century.

Note: – Taj Mahal will be closed on every Friday.

Surface: 240 kms (Approx), 6-7 Hours
After breakfast, drive to Agra. En route visit the abandoned Mughal city of Fatehpur Sikri: built by Emperor Akbar in 1569, was the old capital of the Mughals, which was abandoned after 15 years due to scarcity of water. See the graceful buildings including the Jama Masjid, Tomb of Salim Chisti, Panch Mahal & other Palaces which are still preserved in its original glory. Continue drive to Agra. Evening arrive in Agra and check in at hotel.

After breakfast Agra city tour. Visit Red fort, which was built by Emperor Akbar in 1565, and additions were made up until the time of his grandson, Shah Jahan. It contains the hall of public and private audiences amongst many other beautiful structures; Itmad-ud- daulah, which was constructed by Nur Jahan between 1622 and 1628 and is very similar to the tomb she constructed for her husband, Jehangir, near Lahore in Pakistan; the highlight of the day – The Taj Mahal, which was constructed by Shah Jahan in memory of his wife Mumtaz Mahal. Construction of the Taj began in 1631 and was not completed until 1653. Overnight stay in Hotel. 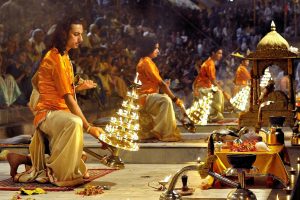 Surface: 24 kms (Approx)
After breakfast proceeds to Sarnath. Visit the ruins, the stupa, the Buddhist temple & the museum (closed on Fridays). At the museum is the Ashok Pillar with its four guardian lions, used as independent India’s national emblem. In the evening you are free. Return to the hotel for overnight stay.

After breakfast drive to Varanasi Airport to board the flight for Delhi. Arrive in Delhi transfer to International Airport. Arrive home with wonderful memories of your tour escorted by Surya Reisedienst.